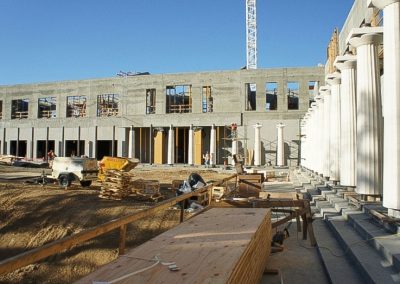 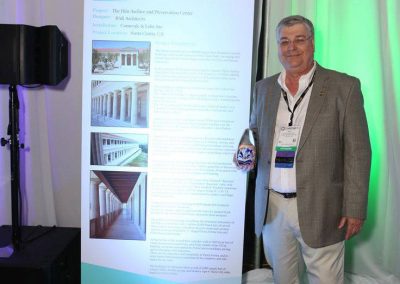 This new building, inspired by the ancient Greek Stoa of Attalos with its two story colonnades and classical pediments, consists of nearly 105,000 square feet of handset honed “Biancone” Marble.

Along the colonnades of the building are (64 fourteen foot tall, and 58 ten foot tall) fluted columns installed over the buildings structural columns, with 62 intricately carved lattice handrails set in between.

Dividing the floors of the colonnade is a five foot tall entablature with massive 8 foot by two foot beams at its bottom, metope and triglyph carvings in its center, and 800 pound moldings at its top.

Crowning the colonnade is a four foot tall cornice consisting of eight foot long beams below five courses of moldings which are four feet long.

On four elevations of the building are classical Greek pediments comprised of cubic stone. Over 70,000 square feet of wall cladding covers the building, all mounted with stainless steel clips attached to stainless steel framing. With so many different shapes and installation locations on the project, specialized steel frames were fabricated to assist in the hoisting and placement of the heavy cubic stone elements.

Lining the bottom of the building is 5,000 square feet of natural roughback “Fondola” limestone. Set at a five degree angle, it replicates the look of a stacked block foundation like those found in many structures from antiquity.